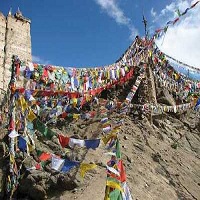 The Leh Palace, also known as 'Lhachen Palkhar' is one of the most historically rich edifices that can be found in the country and is located in the breathtakingly beautiful Kashmir, in the town of Leh in India. This grand structure was built in the 17th century by King Sengge Namgyal as a royal palace, and the King and his family were the former residents of the majestic mansion. The Leh Palace is also one of the tallest buildings of its time with nine stories in all, and offers marvellous panoramic views of the entire town of Leh, as well as of the Stok Kangri and Zanskar mountains of the mighty Himalayan ranges, thereby giving the palace a strategic position.